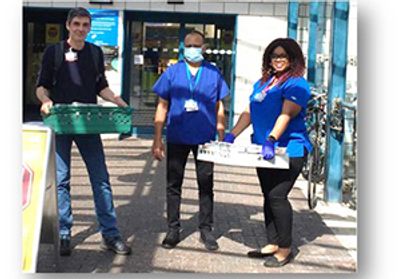 So, what kind of things do More2 do to help the community? We thought you would be interested in hearing one of the things we have been up to during the summer to help the more vulnerable in our community.

Firstly, to set the scene, five years ago More2 joined Neighbourly, an award-winning B corporation, which is a company that meets rigorous standards of social responsibility and environmental performances. Neighbourly partner with many major supermarkets to redistribute overstocked shelves and produce that is approaching sell by dates. Neighbourly have a text system that alerts the Directors of More2 when food is ready for collection. Marks & Spencer were our chosen supermarket chain and over the years we have built a very strong relationship with them.

Greenwich – a diverse and multicultural London Borough
As a local myself, I have seen Greenwich change vastly over the years. I have grown up in Greenwich and have chosen to bring my four children up in this diverse and multicultural society. When my children were young and I started meeting other mums and dads, I quickly realised that many of my new friends were not from Greenwich and many were not from the UK. In fact, 23.5% of our population are from outside of Europe and 7.3% are from Europe, leaving only 69% of our population of Greenwich born in the UK, 17% under the national average. The Royal Borough of Greenwich has a significant immigrant population that may need more support from its community, especially in times of a pandemic.

Whilst our nursery is situated amongst the new development of our Royal borough, it does not change the true fact that Greenwich is an economically deprived area. Home ownership is significantly lower and rented accommodations levels are higher than the national average. The rate of unemployment is higher than average with more families on benefits, there are more people struggling for basic food supplies than many other London boroughs.

Getting food to those in need
These figures fuelled my ambitions to help those that are more vulnerable than myself, this is one of the reasons why I volunteer to distribute food to our community.

Over the winter months, Marks & Spencer baked trays of bread for More2, this bread was then distributed by us to the night shelter at The Forum as well as distributed at times to staff at the nursery.

M&S also joined with us and collected for our local charity MumsAid to gift presents to 12 young mums in our community and make them smile at Christmas.

Then in March, when lockdown was announced, Marks & Spencer collection was increased from once a week to 5 times a week. It became increasing difficult for me to find places to distribute the food and goods to the vulnerable and very time consuming. However, I continued through the whole lockdown and searched for a partner. It wasn’t long before I found Kevin McBrien from Clockhouse Community Centre in Woolwich Docklands.

A plan is formed
On 23rd March when the country went into lockdown Kevin McBrien quickly put a plan together to help the many vulnerable families and individuals who use his community centre. Whilst he had to close the building to the public, halting their entire rental income, he still had an operational kitchen, a great resource to help provide food for local vulnerable and isolated. Kevin was able to secure some funding and then formed a partnership with Greenwich Council Development Agency (GCDA) to create a pop-up kitchen and provide meals for 135-150 families a week throughout the whole of lockdown. Kevin set to work to find volunteer drivers to reach out as far as Abbey Wood and Thamesmead to deliver food as well as providing a weekly delivery to the Queen Elizabeth hospital.

Very soon More2 and other community groups such as The Bridge in East Greenwich were sharing the food collection from several supermarkets including M&S, Aldi, Lidl and Asda. Deliveries were coming in thick and fast, Kevin’s team were using some of the food to create dishes and then made up food parcels with the rest of the produce. Whilst the streets were quiet and the community were almost entirely remaining in their houses Kevin’s team were busy cooking, driving and delivering to those families that needed it most in our community.

About the Clockhouse Community Centre
I met with Kevin last week to find out a little more about how his journey all started. In March 2018 Kevin joined the Clockhouse Community Centre as Manager and his aim was to improve the centre by ensuring it catered to a hugely diverse local community by providing a vast range of services and activities. Before Covid-19 the centre attracted a vibrant community, a number of charities and businesses used it and offered services to local people. In partnership with Greenwich Council Development Agency Kevin changed the kitchen to a shared resource where he had chefs and cooks from GCDA in addition to his café manager Justin. Between them they were producing 600-700 freshly cooked meals per week which they then delivered locally as well as having a constant stream of people calling into the Centre for food parcels.During lockdown and after the restrictions were eased, this delivery service continued until very recently when he has begun to gradually phase it out.

Planning a recovery
Kevin is now planning to gradually reopen the Community Centre, making tentative arrangements for a return of some furloughed staff and a return to those groups seeking to hire rooms again. He hopes to see the Clockhouse become busy again, but he is realistic in thinking and expecting that it may take some time to get back to the level of customers he had before March. Whilst the key objective is to have the building return to its former self, 7 days a week from 9am till 9pm (91 hours a week). It is unrealistic thinking that it will happen this year. The Centre hopes to see the return of a few groups in the immediate period ahead but it is difficult to predict just how soon things may recover. A couple of Clockhouse tenants have returned such as the Her Centre, a Women’s specialist support businesses, but some other are currently choosing not to return immediately. It seems as if this period of uncertainty will continue which unfortunately will have a detrimental effect on Kevin’s income.

Kevin is happy to become a food collection portal with a decrease in the delivering aspect being unavoidable. He does need the support of volunteers like myself that are happy to continue their support by collecting food and his team on board to continue the promotion of his facilities. With so many vulnerable people on the Clockhouse estate he has offered to continue as a food bank and supply on a collection only basis.

It was interesting talking to Kevin this week from his café in the Clockhouse, he has seen the demand for a food delivery service change, the NHS have no need for his support any longer and many of the families he supported are now able to go to shops and get back to work. Kevin told me “We were there to supplement the food people were already receiving rather than being their sole source of food. We received overwhelming positives from people particularly as we knocked doors and connected visibly with them. This level of support was very much appreciated”.

Kevin plans to get the Clockhouse café back open 3 days a week, he will have limited tables and seats inside, but he plans to concentrate on offering take away meals, sandwiches, hot and cold drinks etc. The Food Collection Portal will run alongside the café and will offer an emergency food programme. The expected plan is that this will operate two afternoons a week and will be a collection rather than a delivery service.

Looking for Volunteers
Volunteers are always welcome at the Clockhouse Centre, they could always do with a bit more support.

If you have any marketing or admin skills or you have a car and are able to pick up food deliveries from local supermarkets and bring them to the centre, please get in touch with Kevin to see if you can help. It would be wonderful to support this amazing charity that has already done so much for our vulnerable community.